Motors & Choppers – The Real Stars of the Show Engine: 6 Cylinder 24 Valve 2993cc
Torque/BHP: 332 lb-ft 335BHP
Performance: 5.5sec 0-60mph, max speed 151MPH
Information: These performance SUV's can outrun most cars on the road. Filled to the brim with kit, fast off the mark with enough grunt to keep up with criminals, paired with expert drivers trained in advanced driving techniques, they are the perfect car for the Interceptors. Engine: 6 Cylinder 24 Valve 2993cc
Torque/BHP: 332 lb-ft 335BHP
Performance: 5.5sec 0-60mph, max speed 151MPH
Information: The same as their marked counterparts, these performance SUV's keep a low profile, you won't know they're there until it's too late. Filled to the brim with kit, fast off the mark with enough grunt to keep up with criminals, paired with expert drivers trained in advanced driving techniques, they are the perfect car for the Interceptors. Engine: 4 Cylinder 16 Valve 1993cc
Torque/BHP: 295lb-ft 197BHP
Performance: 7.2sec 0-60mph, max speed 152MPH
Information: The Skoda Octavia VRS are used by the Dog units. With enough power to keep up the chase and plenty of room for two dogs in the back. These come in both a marked and unmarked variant. It's game over if you see one of these in your rear-view mirror Engine: 4 Cylinder 16 Valve 1993cc
Torque/BHP: 295 lb-ft 254BHP
Performance: 6sec 0-60mph, max speed 155MPH
Information: You'l see both marked and unmarked variants of these being used by the interceptors. Loads of room for kit and anyone who is unlucky enough to cross the Interceptors. Paired with a skilled Interceptor you'll unlikely to get away from this performance car. Engine: 6 Cylinder 24 Valve 2993cc
Torque/BHP: 520 Nm 383 lb-ft 254BHP
Performance: 7.8sec 0-60mph, max speed 130MPH
Information: You might be more used to seeing these behemoth Beemers taking the strain on the school run. But there’s a whole lot more to this rugged off-roader than just being a pimped up pushchair! It’s beefy engine, elevated position and ‘go anywhere’ four by four transmission make them formidable Interceptor pursuit cars, ready to take the chase on or off road. No wonder it’s normally the sergeants who reach for keys of this formidable cruiser. Engine: 6 Cylinder 24 Valve 2993cc
Torque/BHP: 540 Nm 398 lb-ft 254 BHP
Performance: 5.7sec 0-60mph, 155MPH
Information: The 530 might be the workhorse of the fleet, but beneath those utilitarian estate car lines, you’ll find the heart and soul of a thoroughbred racer. Breathtaking acceleration and an eye watering top speed all wrapped up in car that’ll take a chest of drawers in the back! Word of warning to Lincolnshire’s criminals, If you see one of these in your mirror and you think you can out run it, think again. Engine: 1997cc 16v four
Transmission: Six speed manual, all wheel drive
Performance: 3.9sec 0-62mph, 21.6mpg
Information:Yet another FQ car from Mitsubishi - aren't these faux-rally cars a bit out of favour at the moment? True, but after ten minutes behind the wheel of the UK-only FQ360, you’ll wonder why. It's an absolute belter. Utterly driver-centric, unfeasibly fast, with incredible body control, excellent damping, and superb steering. To cap it all, it has four-doors-and-a-boot practicality. It may not be the flavour of the day, but there's no denying the Evo's supercar-slaying qualifications. 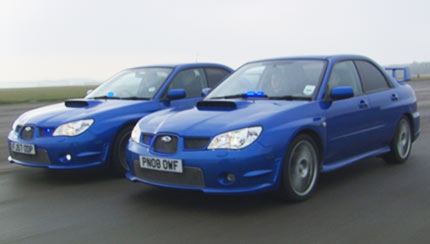 Engine: Flat-4-cyl, 2457cc turbo
Max power: 266bhp@ 5700rpm
Performance: 5.2 sec 0-60mph, max speed 143mph
Information: The lesser Impreza has always been a bit of a sleeper, its five-speed gearbox and symmetrical four-wheel-drive seeming slightly old-fashioned next to the STI, but the truth is that the WRX is damn near as quick down a B-road and a bit less frantic in the process. The GB270 turns the STI-baiting capacity of the WRX up to maximum. They operate an EC135 T2 helicopter. It has two Turbomeca Arrius engines and cruises at 120 kts. It was purchased new for £3.4m in April 2004 to replace the AS355 twin squirrel helicopter, which had been operated since the unit commenced operations in April 1998.

The helicopter has a pilot and two police air observers. One observer operates the camera systems and the other is the tactical commander, responsible for navigation, radio communications and tactics.

A 54 x-magnification colour TV camera and thermal image (Thermal image camera) camera coupled to a digital video recorder. The Thermal image camera camera distinguishes a scene based on different heat signatures. In general, living creatures (including people) are warmer than their surroundings and so are identifiable to the Thermal image camera. The Thermal Image Camera normally now can differentiate between police officers wearing uniform and members of the public/offenders, but sometimes is 'fooled' by other heat sources, most notably water or compost heaps.

A microwave downlink enabling TV pictures to be transmitted to both Nottinghamshire and Derbyshire force operations room and to a number of briefcase receivers these can be fitted into police vehicles as well'. This can be especially useful in pre planned operations allowing scene commanders to see what is actually happening.